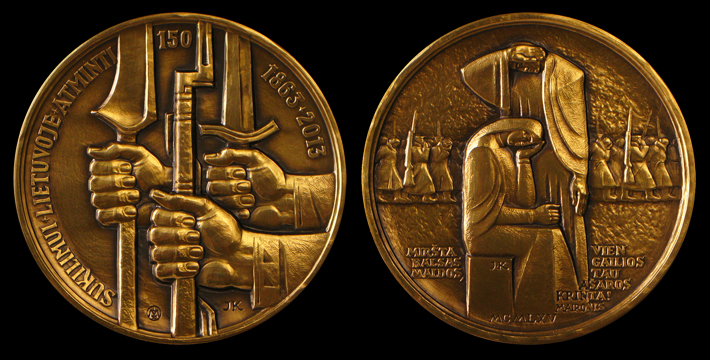 The medal recalls the brutally suppressed Uprising after which more than 20 thousand people were deported. The obverse shows three hands symbolizing peasants, nobles and soldiers as the sign of the united Lithuania because all social classes participated in the Uprising. The reverse shows two painfully bent shapes behind which the deportation is shown. The medal is stylized and the shapes are conceptual and it allows getting much closer to the expression of absolute pain. The shapes of deportees create the frieze which seems to extend outside the edges of medal that means the infinite number of martyrs. The view is instantly enthralling, capturing and tragic so that the medal appears to be the monumental work. Without losing tension and complexity the stylization is connected with the symbolism and the symbology is the starting point of all intellectual activity. The medal created by Juozas Kalinauskas is more intellectual than emotional despite Maironis’ quote. Direct transformation of the objective reality to the subjective experience and abstraction makes this medal a very representative work in the gallery of traditional forms.